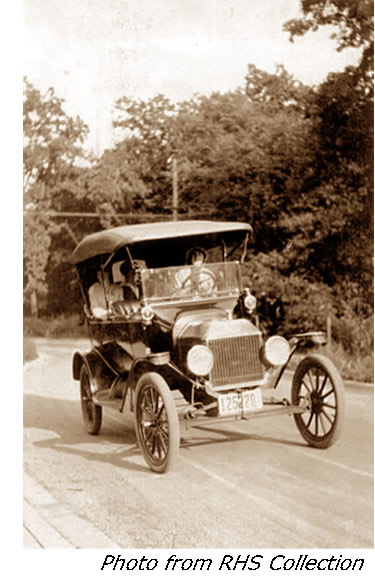 Prior to the arrival of the automobile, means of transportation were limited. Locally, people relied on horse and buggy, an occasional trolley, bicycles or walking. Long-distance trips were made by train, confining travelers to established routes and schedules. The advent of the automobile allowed more options and freedom for traveling, but to make automobiles really usable, it became obvious that there needed to be a great improvement in roads. In the early 1900s most roads were dirt, and while passable in dry weather, became muddy quagmires when it rained.

The Good Roads Movement was founded in 1880, initially by bicycle enthusiasts, but other groups took the lead once automobiles became more popular. Good Road advocates pushed for new road construction and improved roadways throughout the country. They often involved themselves in local politics and these issues often became crucial factors in elections. As a result of this movement, major cross-country projects directly affecting Illinois came about. The first was the east-west Lincoln Highway in 1913. 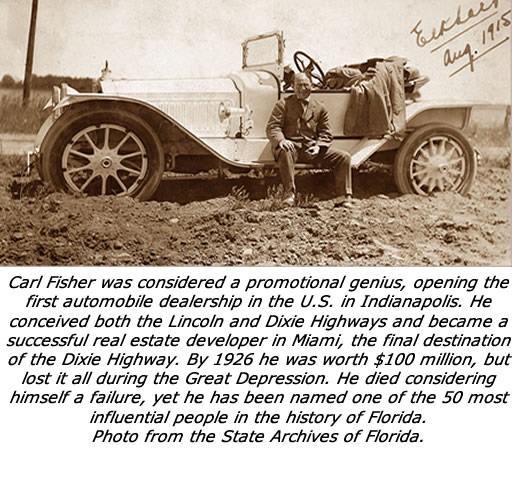 Then in 1915, Carl G. Fisher, an Indiana entrepreneur who had business interests in both cars and real estate in Florida, envisioned a highway that would run from Chicago to Miami. Thus, the north-south Dixie Highway was born. In fact, where these two roads, the Lincoln Highway and the Dixie Highway, cross, just south of Chicago in Chicago Heights, is known as the “Crossroads of the Nation” to show their historical significance.

The Dixie was actually a system of interconnecting roads that wound its way through the middle of the country. In Illinois, the Dixie started in downtown Chicago at Michigan and Adams, ran south to 55th Street, turned west to Western Ave. and ran south on Western through Beverly Hills and Morgan Park. The Dixie continued south through a numberof towns in Illinois, crossing over into Indiana around Danville. 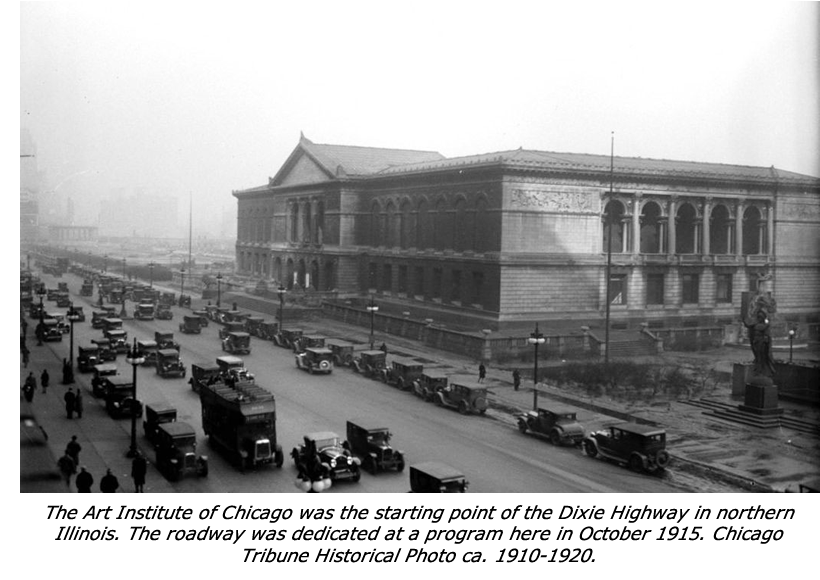 It should come as no surprise that local politics played a big part in the route of the Dixie Highway. Competition for a place on the highway was fierce, as that promised income from the many travelers who would pass through. The original plan was to have the highway start in Chicago, then immediately swing east into Indiana, Fisher’s home state. But the Illinois delegates to the planning meeting lobbied the other states for a greater role for “the Land of Lincoln.” As a result, the route selected ran from Chicago south for about 136 miles before turning east to Indiana. Eventually, throughout the country, over 5,000 miles of roadway became part of the Dixie Highway. 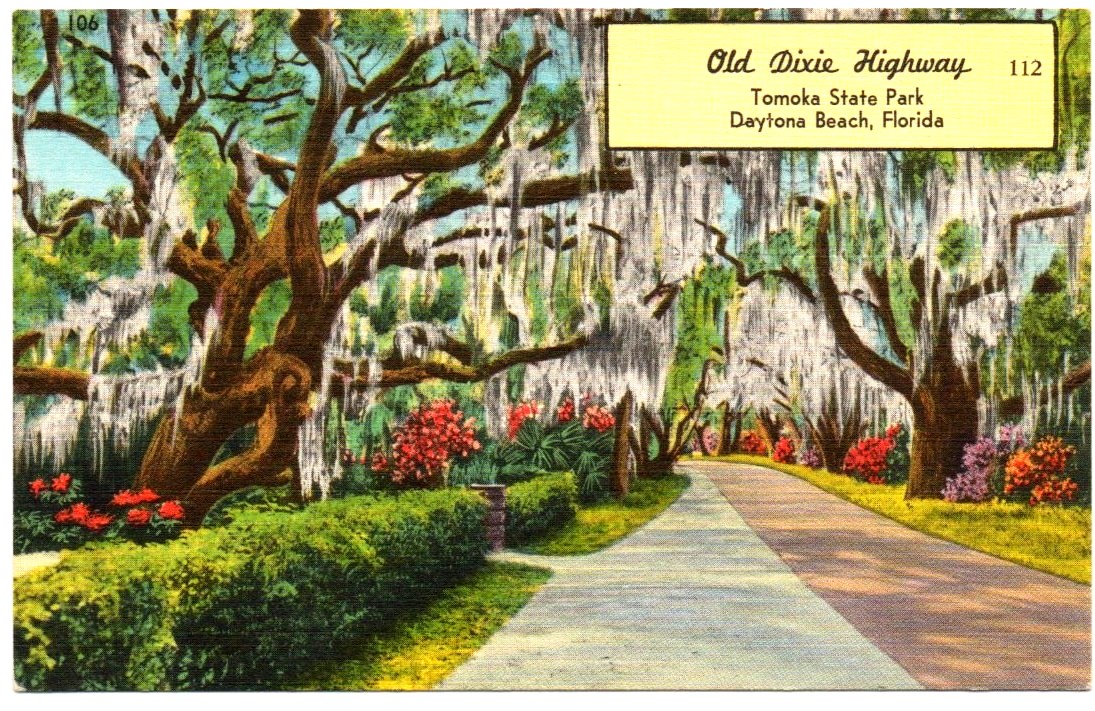 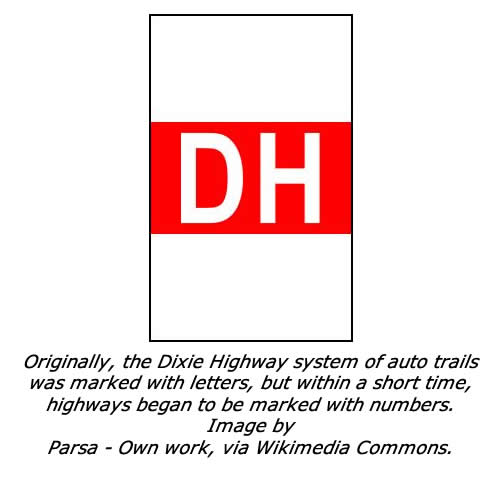 The Dixie Highway was marked with distinctive red and white “DH” signs. They were painted on poles and fence posts. In the late 1920s, numbers began to replace names in the growing highway system. As the federal interstate highway system began to be developed in earnest in the 1950s many of the old local routes throughout the country fell into disuse or were reconfigured. With the completion of Interstate 57 in Illinois, the Dixie Highway lost its stature. However, it still remains a backbone for many of the communities it passes through. Today, in Illinois, much of the old Dixie Highway is now Illinois Route 1.

In Illinois, every year on the third Saturday in June, hundreds of vintage and modern automobiles take part in “Driving the Dixie,” a road trip that begins in Blue Island and ends in Momence. Along the way, drivers stop to tour historic points of interest, grab a snack, and have their “passports” stamped, to be eligible for prizes at the grand finish. For more information on this event, which is open to the public, visit the website, www.drivingthedixie.com.

“Auto Trails” were an informal network of marked routes that existed in the U.S. and Canada in the early 1900s. The need for longer, interstate roads had become evident during the Good Roads Movement, thanks to automobiles. Private organizations and even individuals established the routes, which usually had some type of color-coded identifying markers painted on telephone poles and other posts.

In 1913, the Lincoln Highway Association was created to establish a road between New York and San Francisco. Two years later the Dixie Highway Association was formed. These organizations were funded by subscriptions from cities and towns on the proposed route, individual memberships, and donations from corporations. Actual construction and maintenance of the roads remained the responsibility of the individual states.

The National Highways Association was started in 1916, with the slogan “Good roads for everyone!” This organization helped establish over 50,000 miles of highways, and created maps to help motorists navigate the growing system of roadways that was becoming increasingly more complex.

There were some problems with the auto trails system. In some areas, states would not cooperate with the associations, impeding building and maintenance.

Another problem was unscrupulous promoters collecting money for roadways and then disappearing. Multiple trails using the same roads would cause confusion for the motorists because of the overlapping signs.

In 1926, the U.S. Highway System was created and auto trails were replaced by numbered U.S. Highways. East-west highways were given even numbers; north-south highways, odd numbers. The Dixie Highway Association was disbanded in 1927 since the federal and state governments were increasingly providing funding for the roads. Most of the Dixie roadways were assigned route numbers. But in many places, the “Dixie Highway” remains a local road where it has been bypassed by more modern expressways.

Click here for a larger view of the map.